From May 21 to June 30, 2016 The Berlin Galerie Hilaneh von Kories will present photographs by the German photographer Neal McQueen under the title “Perilous Hope – A Photodocumentary on Refugees”. 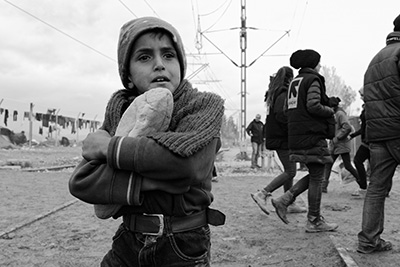 Never since World War II have so many refugees been on the road worldwide and especially in Europe. Every day we read and hear in news and reports about escape routes, people smugglers, dramatic situations and the frequent tragic failure of many escape attempts. As opposed to many photojournalists who give the European refugee crisis visual reality Neal McQueen sees himself more as an independent photographer, as a humanitarian activist.

For many years Neal McQueen has been engaged with the social and political changes in Europe. In the summer of 2015 he traveled to Greece, again and again. In the spring of 2016 he also worked on the Greek-Macedonian border in Idomeni. It is this spot which received international attention, because after the border was closed thousands of desperate refugees moving along the so-called Balkan Route were stopped in this little border town. They could not move on and were thus forced to remain in the region under appalling conditions. The shocking plight of Syrian refugees in Athens determined his resolution to deal with the refugee crisis in a deeper and more intensive way. In the fall of 2015 he returned to Athens and then continued on to Lesbos. It only took a few days for him to realize the dimension of this humanitarian crisis and so he decided to stay. Since last summer Lesbos has been one of the major refuge spots in the east Mediterranean Sea. Very hesitatingly did the local administration get international help, so that the conditions on the island were unbearable. Other Greek islands were also important locations of refuge and the routes changed constantly, but still most refugees landed on Lesbos: Every day several thousand people. Every one of them has his own tragedy, his own history, which made him undergo this life-threatening passage to Europe. The individual easily disappears behind the numbers and statistics of press publications. McQueen’s photographs which show his sympathy with the plight of the refugees give the individual a face, a perception. Apart from this he accompanies and documents the movement of private volunteers. He watches and supports the development and actions of new NGOs and at the same time casts a critical eye on the behavior of the established, large government institutions… leggi tutto