Organizzato da : Italian Institute of Culture, Consulate General of Italy in Edinburgh and Italian Studies at University of Edinburgh 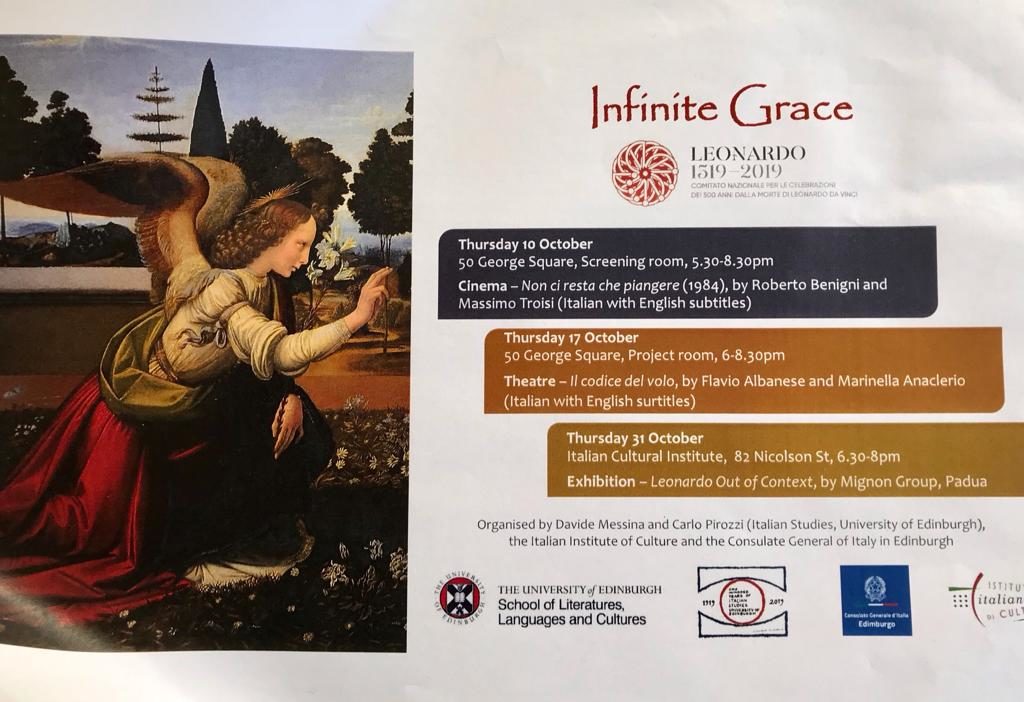 The ideals of regeneration and cultural innovation of the Italian Renaissance are most embodied by the figure of Leonardo Da Vinci.
Leonardo was an artist, a mathematician, a writer, an architect, a botanist, an engineer, a cartographer, and a geologist in a period when all the different branches of human knowledge were merged together without exclusive identity. Thanks to his deep knowledge of the past and his mind open to the future, Leonardo had a unique understanding of the time in which he lived and his legacy still has a great influence in the modern day. His astonishing work is a constant source of inspiration and learning, and his inventions have been reconstructed and studied in detail.
Without any doubt, Leonardo represents a modern myth. His figure is vivid in our social imaginary and, even more, in the places of our everyday life. He has schools, museums, streets and squares dedicated in his name, while his work is reproduced on coins, logos, clothes and every kind of commercial product. Whether you agree or not with the marketing of his persona, Leonardo has become a popular icon like no other.

Following these considerations, the Mignon group, which for more than 20 years has been focusing on Street Photography, decided to dedicate to him a photographic project entitled “Leonardo out of context ”. The aim of the project is to portray Leonardo’s persona from a different perspective compared to other publications and exhibitions and to pay respect, with authenticity and truth, to his legacy. On a different level, street photography and Leonardo himself provide us the opportunity to explore deeper our modern world, highlighting its merits and limits. In the contradictory society in which we are living, Leonardo stills represent a timeless model to follow for all generations.

MIGNON is a cultural association based in Padua. The aim of their project is to investigate everyday life, individuals and their environment through photography. The specific interest for people and their surroundings has led to the establishment of a group that has at its heart photography as a communicative phenomenon, a group that sees together professional and non-professional photographers. Through their eyes, these photographers put us in relation to the world, sharing common experiences of a technical, but especially human nature. The success obtained with the critics and the interest for the group’s exhibitions prompted Mignon to start other activities such as promotion of events, courses, meetings and exhibitions by other photographers. Since its establishment, the group has had a strong interest for testimonies of photography with a social vocation: from the fundamental work carried out by the FSA Farm Security Administration and the unparalleled role covered by the Photo League in the growth of photographic culture, to the best pages of world photojournalism (LIFE and Magnum photographers). Some encounters with “humanist” photographers have helped to providing great vigour and enthusiasm to the project. The exchanges with Giovanni Umicini and Walter Rosenblum influenced the poetics of the Group, that moved the attention specifically on to “Street Photography” and the operational tools used: an essential black and white, followed by the shooting and up to the final printing process. Currently the group is composed of Giampaolo Romagnosi, Ferdinando Fasolo, Fatima Abbadi, Giovanni Garbo, Davide Scapin, Mauro Minotto.

Monday and Tuesday from 2pm to 5pm